Other Details:  This native Oak, the Quercus tomentella is found on the Channel Islands in California and two of the Baja Islands and is rarely seen as a specimen on the mainland through cultivation. Though it is now limited to the islands, it was once a widespread tree in mainland California, as evidenced by the many late Tertiary fossils of the species found there. Commonly called, the Island Oak was listed as a vulnerable species by the International Union for Conservation of Nature in 1998. Some consider the Quercus tomentella the most handsomest of California evergreen oaks trees. 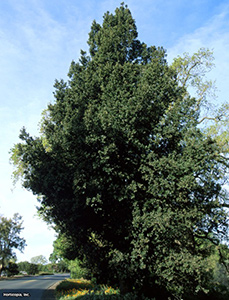