Other Details:  Native to California and drought tolerant the Heteromeles arbutifolia or commonly called Toyon is excellent for hillside coverage and screening but can also be pruned into a small tree that has dense foliage. Accordingly, “the abundance of this species in the hills above Los Angeles… gave rise to the name “Hollywood.” In the 1920s, collecting Heteromeles arbutifolia Toyon branches for Christmas became so popular in Los Angeles that the State of California passed a law forbidding collecting on public land. Heteromeles arbutifolia are visited by butterflies and the fruit are consumed by birds. Mammals including coyotes and bears also eat and disperse the pomes. The Toyon pomes provided food for local Native American tribes and the pomes also can be made into a jelly. Native Americans also made a tea from the leaves as a stomach remedy. Heteromeles arbutifolia or Toyon was adopted as the official native plant of the city of Los Angeles by the LA City Council on April 17, 2012. 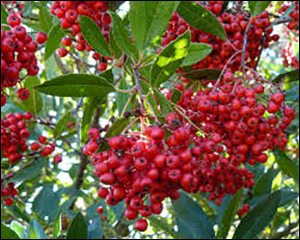